Matthew Roche pinged me on Twitter the other day to ask about the workflow and gear I use to record Knee-deep in Tech. After responding on Twitter I decided it was time to do a new round of “The Tech of Knee-Deep in Tech”.

I’ll divide this into several blog posts due to the sheer amount of information.

Let’s kick off the first part of the series – the gear.

Recording on the move

When we’re at the same place to record (which is rare these days) or when we’re out and about and do interviews with people, we use a Zoom H6 recorder and AKG C520/C520L microphones.

The difference between them is that the C520L has a full-size XLR connector and the C520 has a mini-XLR connector. We use the Samson PM6 phantom power adapter to connect a C520 to the Zoom. We make sure to record all audio on separate tracks. These are condenser microphones that are highly directional and with an excellent, clean signal.

While the audio will suffer if we’re in a less than ideal recording space (lots of noise around us, a big, empty room with lots of reverb, etc.), I find that it the sound still is better with head-worn microphones than if we were using traditional microphones.

Having the microphones literally people’s faces reduce the risk of talking around the microphone as everyone is looking at everyone else during the conversation. This also avoid the need for bulky shock mounts and the like. The whole setup (Zoom plus four mics) breaks down and travels easily in a Thule Subterra PowerShuttle Plus padded bag.

For doing impromptu interviews on for instance an expo floor or on video, we use the Samson Go Mic Mobile. I have one handheld mic and a receiver, and Simon has one handheld, two belt packs and one receiver. We then pull the stero signal from the receiver into the Zoom H6 using the 3.5mm stero input on the Zoom X/Y microphone adapter. What’s nice with the belt packs is that they use mini-XLR plugs – the same connector that the AKG C520 microphone uses. Sometimes we just need two more channels quickly. In that case we bring out the Rode SmartLav+ lapel microphone. It connects (through a 3.5mm stero-to-mono splitter) to the 3.5mm input jack on the X/Y microphone.

This image shows most of the components – absent are the belt packs as I didn’t have them at the time of writing.

Most of the time we’re not at the same physical position. This means we need to record remotely, and this took some thinking to figure out. More about that in the second part of this series.
We are currently three hosts, all with their own gear setup:

I run a Rode ProCaster dynamic microphone on a Rode mic stand. It is run into a CloudLifter and then connected to an Motu M2 audio interface and then run into my main computer. I have acoustically treated my home office, but not overyly so. 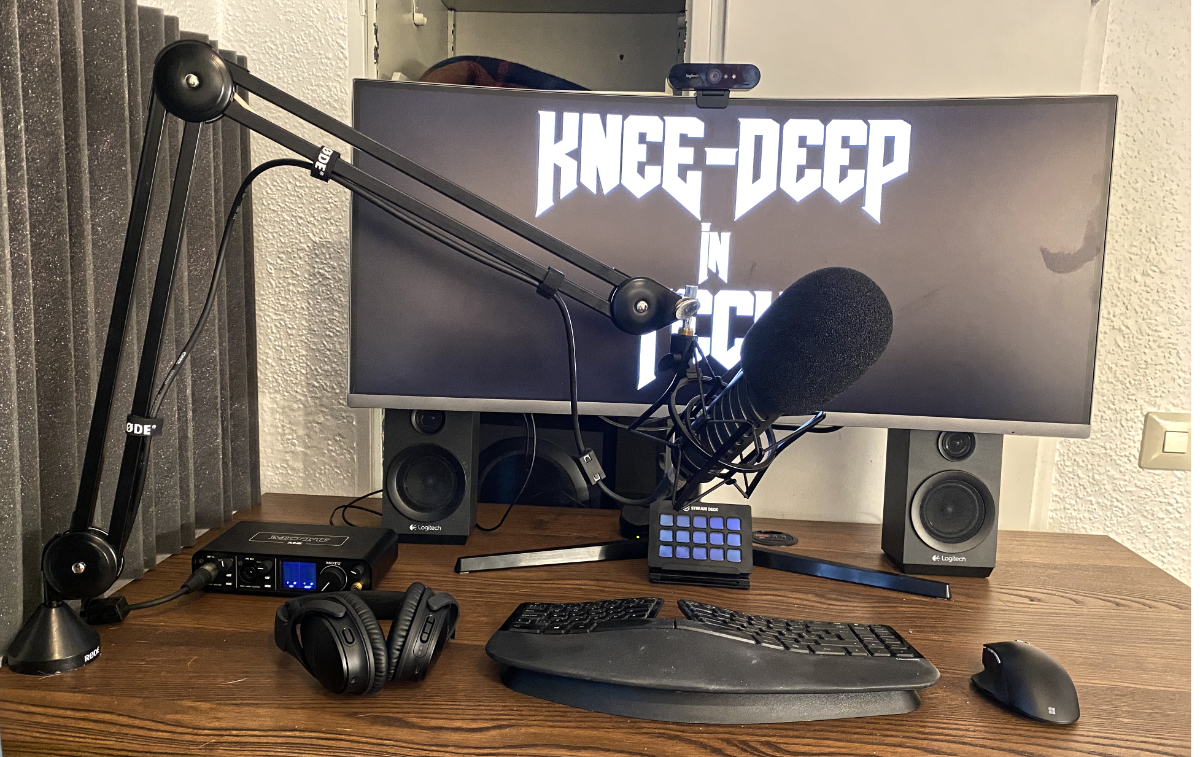 The CloudLifter can’t be seen as it is tucked away underneath my desk.

Simon is using the same AKG C520 condenser microphone connected to his Zoom H6 as he uses when we’re out and about. He has done some acoustic treatment in his recording space, but not too much.

Toni is sporting a HyperX QuadCast USB condenser microphone and run into his main computer. He will soon install some serious acoustic treatment.

A dynamic microphone is most often better for less than ideal recording spaces. This is due to how the microphone works and thus picks up characteristics of the room. One of the drawbacks of a dynamic microphone is the lack of a built-in amplifier. Some microphones require a lot of gain in order to produce a usable signal. Depending on the amplifier this can introduce more or less noise to the signal. The ProCaster is a “heavy” microphone in the sense that it requires a serious amount of gain from the amplifier to produce a usable signal. This generally results in noise as we are also in amplifying the inherent noise of the amplifier.

There are a few ways to combat this: The most obvious choice is to opt for a really clean amplifier/audio interface. “Clean” in this case unfortunately often means expensive. The Motu M2 is a brand-new audio interface with an extremely clean amplifier that is still surprisingly inexpensive. It can drive the ProCaster without introducing a lot of noise.

The other choice is to use a pre-amplifier. I bought a CloudLifter to get a good signal from the old mixer. This is an in-line pre-amplifier that helps drive the microphone and still produces an exceptionally clean audio signal. I still use the CloudLifter with the Motu M2 as the signal it creates is simply amazing.

The condenser microphones Simon and Toni use presents their own challenges. Condenser microphones have in-built amplifiers – that’s why they require power from either the audio interface or the computer itself. They are much more sensitive and tend to pick up room characteristics much more clearly. This in turn means that good room treatment is important – and that’s why Toni is working on setting up acoustic panels in his home office. The reverb is more pronounced in Toni’s audio than in either Alexanders or Simons.

Simon has done some acoustic treatment of his recording space. The treatment is concentrated behind his monitor, and the furniture and carpets in the room help soak up the reverb. The fact that the AKG microphone is a head-worn microphone that sits right in front of his mouth also means that the room reverb becomes less of a problem.

We spent a lot of time and effort on finding good equipment. My extremely good hearing makes me cringe whenever I listen to poor audio. I refuse to force crappy audio on people who choose to spend their time listening to our podcast. That’s why I will spend an inordinate amount of time and money to make sure the audio is as good as I can make it. There is only so much one can do in post-processing and having this gear helps a lot to ensure the raw audio is as good as we can make it. With great raw audio I have all the tools available to really screw things up in post-production!